Therefore, when we looking back to think over questions of self-annihilation of human race, the most worried thing is not the deduction of annihilating measures based on the current scientific theories. If we want to produce tools for extinction of human race according to the existing scientific theories, it will be so complicated and difficult to operate. It will be difficult for those people who hold vindictive attitude for human race to obtain these measures.

The most terrible thing is some breakthrough in scientific theory, especially revolutionary breakthrough, which may bring about some new annihilating measures that we can't imagine today. It must have these features: it is convenient and easy to obtain and use, and force of it is extremely huge, magic and weird.

Then, if this theoretical breakthrough is obtained, the inevitability of these self-annihilating measures is for sure, just like we are speculating today that whether human being can land on Mars one day; just like we were carrying out research ten years ago that whether we could change that cumbersome, mauser-type portable phone into today's smart and convenient one. If this moment really comes, extinction of human race is within measurable distance.

I. Cyclic Breakthrough Law of Science

Copernicus'heliocentric theory and Darwin's theory of evolution belonged to revolutionary truths, which were total repudiation of the geocentric theory and creation dominated for one thousand years. This denial made the traditional Religion and Theology no place to stand, thus completely shaking the base of obscurant control of feudalist of religion. The birth of revolutionary truth, as well as the process for people to accept it is also a process of emancipation of mind. It must exert deep and far-reaching influence on the direction of science and development of human society.

Therefore, what a revolutionary truth influenced is not only the fields it belongs to, but also every aspect of human society including politics, society, science, culture, art and economy.

Revolutionary theory is not total denial for the past mainstream theories (but it may be total denial of the past technologies), but inheritance and development. It eliminates the irrational parts in the past mainstream, and combines some richer and more practical contents. Revolutionary theory may be the overall sum up and summary for the unsystematic theories in the past, which have been eliminated the irrational parts and then improved, thus becoming an integrated and brand-new discipline.

The establishment of revolutionary theory is bound to promote a series of revolutions in scientific technology. Just as without the theory of the relativity, there will be no explosion of atom bombs which shocked the whole world; without genetics as the basis, there will be no birth of genetic engineering in the following.

Development of science is pushed forward in zigzag way as a wave. Though we can’t foretell in details what scientific achievements we will obtain in a longer time, there is regularity to conform of development of science; breakthrough in science is also in typical regularity, which is a kind of Non-linear cyclic law. It is called Cyclic Breakthrough Law of Science or Cyclic Breakthrough Law for short. 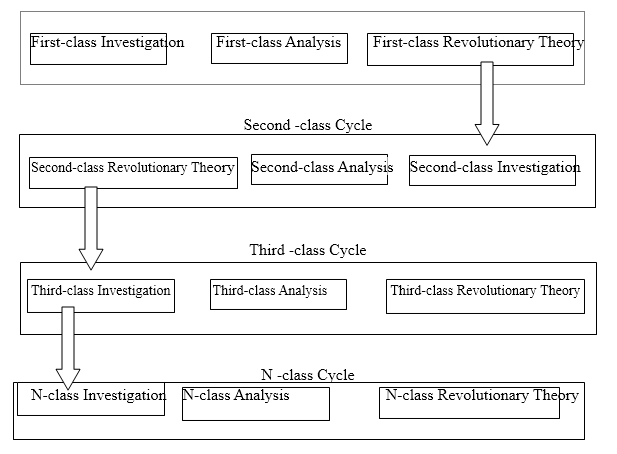 As a theory that is more perfect, more comprehensive and more in-depth than the first-class revolutionary theory, the second-class revolutionary theory will also serve as direction for the third-class investigation and the third-class analysis, which is the beginning of the third-class cycle. Repetition goes on until science is pushed ahead to the N-class cycle and will continue.
3. Scientific cycle revealed by Cyclic Breakthrough Law can be classified into major cycle and minor cycle, also mother-cycle and son-cycle. For example, electromagnetism is a branch of physics. Not only the development of physics follows the Cyclic Breakthrough Law, but also the development of electromagnetism.

At the same time, electromagnetism has its own branches. Compared with cycle of physics, electromagnetism is just a sub-cycle, but as for breakthrough cycle in other branch disciplines and branch technologies, it is a mother-cycle.

4. There is no stride on the road of science. The process of cyclic breakthrough is a gradual process. Each link is the basis of the later breakthrough. So, each link is dispensable, whether it is scientific theory or scientific technology.

Just because there is no stride in the development of science, we are often restricted and confused by the current conditions of science when we visualizing the future of science, thus leading to serious underestimate for super force of outbreaking of future science. We are accustomed to taking the force of today’s science as a reference to evaluate the force of science in the future.

Most of us have this psychology of disidentification for the leap. Until now, many people still firmly believe that scientific theories mastered by human being nearly reach to limited truth. It is because the psychology of disidentification for the leap is creating trouble. While this kind of psychology is seriously affecting the evaluation for the future of science, we found a contradictory phenomenon which is seriously affecting the warning for destructive force of scientific technology in modern society, that is, people are becoming more and more hardened to the emerging achievements of science and technology. This needs to be concerned about.

When photography technique was invented at the beginning of 19th century, people should stand motionless for several hours in the sun if they wanted to take a photo. Even if that, curious people were willing to have a try. When the X-ray was initially discovered, people were surprised about that. It became a hot topic of the streets. Anyone wanted to see his inner structure in body through X-ray, including royalties.  When the electric light was still on the experimental period, journalists were thunderstruck by it. However, we can see today that any invention or any new technological discovery can hardly cause such wonderment or sensation. People have seen so much. Everyday, there are numerous new technological products come into being. It will not take a long time that people will know there are new breakthroughs in which industry or which discipline. People have taken that as a matter of course.

Meantime, we can find that, the emergence of any invention in the past will draw general recognition and concern from the whole society. While discussing its wonder, people would visualize the future of this achievement, and discuss the positive and negative results brought about by it. So, benefit of the achievement for human being in the future was always analyzed thoroughly, whether it was positive or negative.

But today, people have even experienced the explosion of atom bombs and witnessed the cosmonauts landed on the moon. So even if more great scientific achievement can’t cause sensation. Facing with the emerging new achievements, no one is willing to visualize and evaluate future of them under the condition that they don’t cause so much sensation. Maybe some rational person will repeatedly remain the damages they will bring about in the future. But, people will have no interest in these just because they have taken for granted. It is called Development Numbness for this numbness in the whole society exhibited when accepting the achievements of scientific technology.

There is another factor for the Development Numbness. Generally, people who evaluate the security of scientific technology are scientists. People who evaluate the security of a ceratin research project or a certain scientific achievement are the scientist himself who are carrying out this research, or related researchers. If the evaluating result for this project and this achievement is positive, it will bring about many benefits, including: advancing the identity and status of the scientist; benefiting for them to get more research funds and more private economic returns after they put the achievement into production and application. Influenced by profitability of human, scientists will often deny or trivialize the disastrous effect of the researching project and achievement.

Meanwhile, enterprises (including research institutes and schools) that are financing the research also hope that they can get returns form this research project and scientific achievement. So, it is natural for them to pretermit, even ask or encourage scientists to deny and trivialize the disastrous effect.

Then, discovery numbness necessarily leads to crisis numbness. When we take all scientific achievements for granted and accept them without reflecting, we will surely become numb for the negative effects brought about by the achievement. However, disaster often results from numbness. Before towering waves come, surface of the sea is always calm, but undercurrent is flowing beneath the deceptively calm surface. When the whole society becomes numb, a destructive disaster may be around the corner.

In today’s society, we often feel that we can’t keep pace with the times. We are often under the pressure that we must continue studying because we feel that our knowledge isn’t sufficient. Everyday, when we wake up, we will find that most knowledge we previously learned has outdated. There are many new things emerging everyday. If we don’t learn these, it is difficult to survive on society. So, we often say with a sigh that we are living in an era of knowledge explosion.

Fission Acceleration Regularity can be briefly described as follows: the development of science will necessarily result to the emerging of branches in each scientific theory and scientific technology, which are continuously developed by following Cyclic Breakthrough Law. When they are advanced enough, they will be subdivided again, with more new theoretical disciplines and technological classes. These subdivided disciplines will be developed by following the same law. So on and so on, development of science will be showed in a way of fission acceleration state, thus causing the explosion of science and knowledge. With time goes on, degree of this explosion will become stronger and stronger.

Then, let us look back to see the current scientific branches. It is difficult to precisely calculate that how many disciplines have been subdivided, technological classes included in these braches is countless.

From the perspective of Cyclic Breakthrough Law of Science, we can see that, just because these numerous branches and technological classes are pushing ahead according to the Law, thus causing numerous achievements from major disciplines. That is because achievements of major disciplines are the total amount of each subdivided discipline and technological class. It can be indicative that when a new revolutionary theory is born, outburst energy of it will necessarily excess energy of the previous theory.